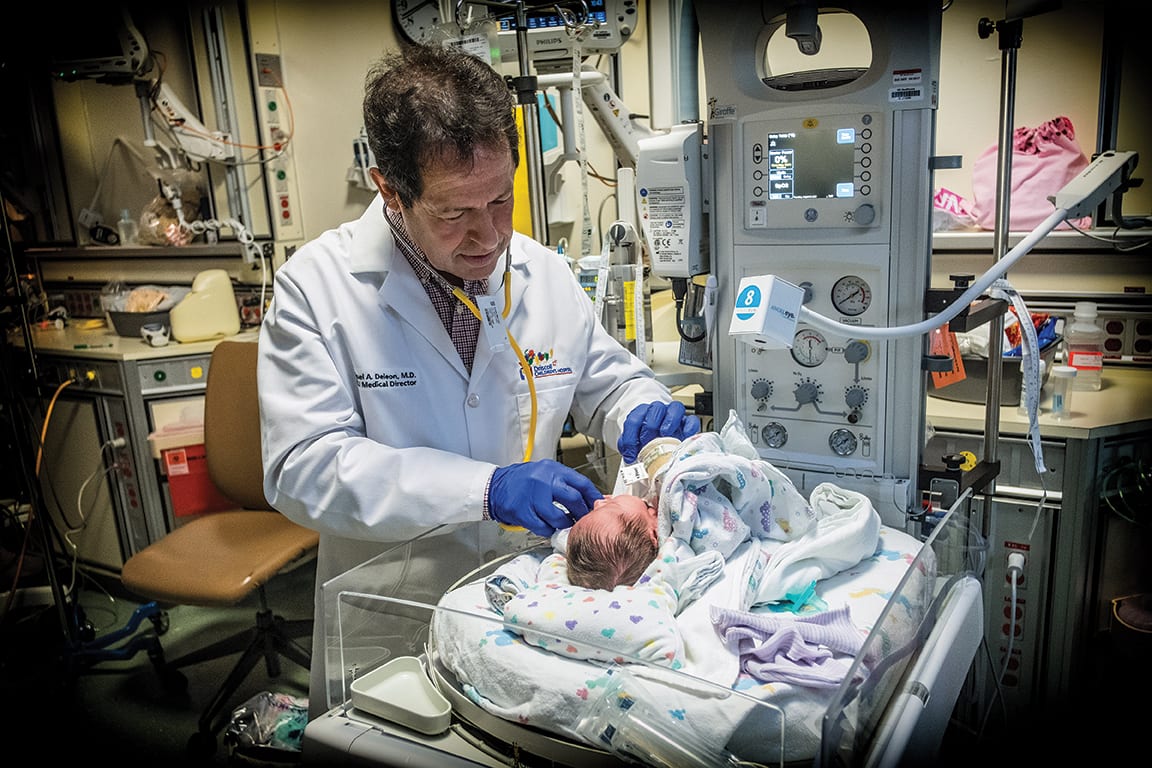 Just hours old, tiny Rafael* arrived at the Neonatal Intensive Care Unit (NICU) at Driscoll Children’s Hospital with kidney and liver failure. These were only the most evident series of complications upon admission. Miguel DeLeon, M.D., Medical Director of Driscoll Children’s Hospital Neonatal Intensive Care Unit (NICU), diagnosed Rafael with a serious infection that could not be treated until his kidneys began to function with the help of dialysis. As the baby’s care progressed, one problem had to be treated before another could be addressed.

It took a sophisticated team of pediatric subspecialists to coordinate Rafael’s complex care in the NICU. Along with Dr. DeLeon and other neonatologists, the team included a nephrologist, surgeon, anesthesiologist, immunologist, infectious disease specialist, and neonatal nurses working together to provide treatment for Raphael. In addition, the infant’s recovery was complicated. He required several specialized therapies to begin performing basic functions on his own, such as breathing and swallowing, without the aid of machines.

Rafael’s story is one of hundreds every year that testify to the remarkable care provided in Driscoll’s NICU. It also demonstrates why the NICU recently earned designation as a Level IV unit, which represents the highest level of acute care for critically ill and premature babies. It is the first NICU in South Texas to receive the respected Level IV which is the highest level of designation.

The staff and facilities are ready for anything
Among the common reasons for admitting a newborn to the NICU are prematurity, genetic disorders, birth defects or other anomalies, serious illnesses, all of which require complex diagnosis and treatment.

“Some problems seem relatively simple at first, but then other hurdles appear,” said Dr. DeLeon. “Our patients are extremely fragile and have complicated conditions. In addition to receiving an array of treatments, they must be monitored constantly. Their care requires an enormous multispecialty team. We have the staff and the facilities and we are ready for anything .”

President and CEO Steve Woerner compares the Level IV NICU to hospitals designated as the highest level trauma centers. “Trauma centers treat patients with the most extreme, life-threatening injuries,” he said. “As with a trauma center, our NICU had to meet extensive criteria to be certified at the highest level. After a thorough review, including a site visit, the American Academy of Pediatrics recommended the NICU for Level IV designation by the Texas Department of State Health Services. We received the State’s official Level IV Certificate of Designation this summer.”
“The AAP’s rigorous process gave us an opportunity to showcase the great work we do in the NICU,” said Trish Carr, PhD, RNC-NIC, Associate Chief Nursing Officer, Driscoll Children’s Hospital. “I’m so proud of our NICU team.”

To minimize the need to move frail newborns, the Driscoll NICU is extremely versatile. The isolettes, a special kind of incubator, can be configured into secure operating space for delicate surgeries. An ECMO heart-lung bypass machine can be operated by a perfusionist right next to an isolette. Cooling therapy for brain conditions, high-frequency ventilation for respiratory failure, and other procedures are commonly done in the NICU.

All of the NICU’s medical and surgical subspecialists have completed advanced education. The neonatal nurse practitioners have received rigorous training, and they undergo additional training every year. Other specialized health professionals who staff the NICU include medical technicians, physical therapists, occupational therapists, respiratory therapists, clinical dietitians, and speech language pathologists.

Why, you might ask, would speech pathologists be needed in a NICU? They are the therapists who help premature and medically fragile babies acquire sucking and swallowing skills for oral feeding, and they train parents how to support these skills. Feeding issues may arise again in the transition to solid foods. Many NICU graduates need speech therapy when they begin speaking.

Even when babies remain in their birth hospital’s NICU, Driscoll specialists support their care. “South Texas has several other NICUs that treat newborns who do not need the intensive services of a Level IV unit,” said Mr. Woerner. “Our neonatologists assist those NICUs by providing education and sharing protocols with their neonatologists.” 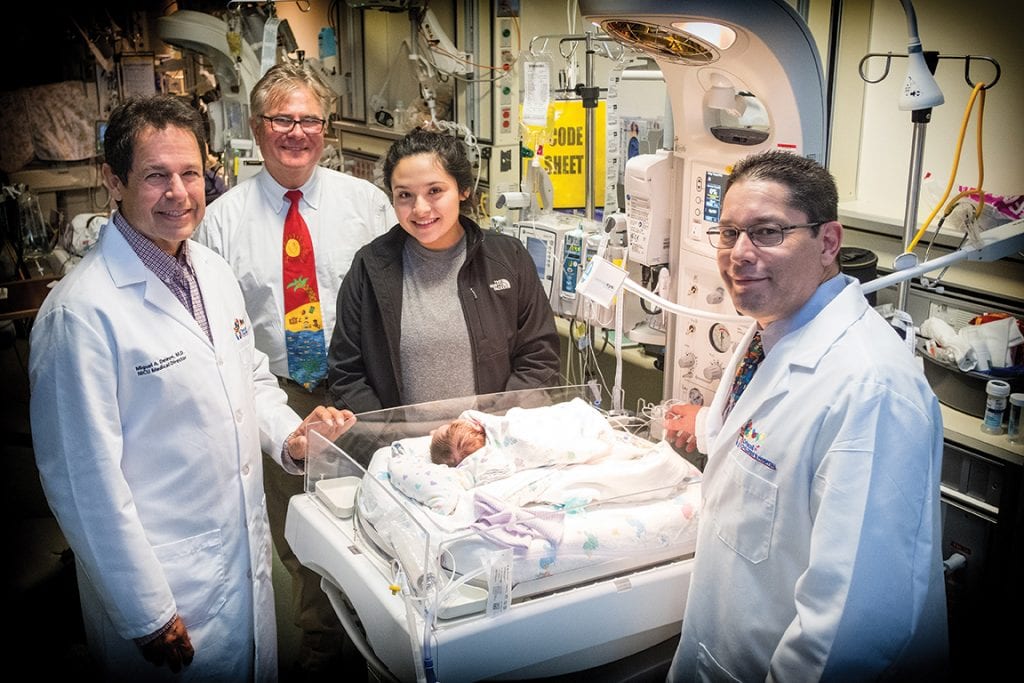 Parents Become Part of the Team
The Driscoll NICU’s family-centered approach incorporates parent participation and family support. Parents may visit their babies around the clock. They are encouraged to attend physician rounds, during which members of the multidisciplinary NICU team discuss their baby’s condition and coordinate treatment. This gives the parents the opportunity to ask questions and be involved with decision-making processes. Language is not a barrier, as medical interpreters are available if needed, and many staff members are fluent in Spanish.

“We make it possible for parents to be present even when physically absent, which gives them tremendous comfort,” said Dr. DeLeon. “When parents are unable to be in the hospital, Angel Eye cameras transmit live footage, allowing families to see their baby at all times. A webcam mounted on a mobile kiosk enables parents to see and hear and speak with the NICU specialists as they conduct rounds.”

Care Sometimes Begins Well Before Birth
Frequently, conditions that may send a newborn to the NICU can be detected during pregnancy. For babies, prenatal detection of an abnormality or genetic defect can guide care in the NICU. If needed, surgery can be performed in utero. Expectant moms with high-risk conditions, such as high blood pressure and diabetes, or prenatal complications, such as preeclampsia, need specialized care to ensure they and their babies have healthier outcomes following delivery.

Driscoll has six Maternal Fetal Medicine physicians, the specialists who diagnose and treat such complicated pregnancy problems. Working in seven locations across South Texas, these doctors provide consultation and patient co-management for obstetricians, and also provide direct patient care. Some women with high-risk pregnancies who live far away travel to Corpus to give birth. They typically tour the NICU in advance to get familiar with the unit and lessen anxiety when their babies are admitted.

One of the Largest Hospital Transport Systems
“Driscoll has the most advanced transportation system of almost any hospital,” said Mr. Woerner. “Compared to urban-centered NICUs, we have the challenge of serving 31 South Texas counties over a 33,000-square-mile area. And we have to cover that distance as fast as possible when we have a very sick baby to treat.”

The hospital’s patient transport fleet of three airplanes, two helicopters, and four critical care ambulances makes it possible to cover this vast geography. Specially trained nurses, paramedics, and respiratory therapists are on call 24/7 to care for babies and mothers on their way to Corpus.

During his 23-year tenure at Driscoll, Chris Joyal, RN, BSN, CPN, NICU Director/Neonatal Program Manager for Driscoll Children’s Hospital, spent seven years in the hospital’s transport services department. “We have an amazing response time,” he said. “Eighty to ninety percent of our NICU patients come from outside the Corpus Christi area. Whether by ground or air, our transport team is ready to set out at any time.”

Follow-Up Continues after Babies Go Home
Because babies who have been in the NICU may be at risk for developmental delays, they need close monitoring for these delays. Driscoll’s High Risk Follow-Up Program provides this service for NICU graduates who meet certain criteria. Eligible babies are followed up to age three.

Follow-up care includes monitoring and testing for developmental milestones. Identifying problems early gives babies a better chance for healthy development and growth. The babies can receive therapies at one of Driscoll’s high-risk clinics. Currently, these clinics outside of the hospital’s main campus are in Laredo and Brownsville. Two more are planned for Harlingen and McAllen. The clinic specialists consult with local doctors, and most procedures can be done locally. If a baby needs readmission to the NICU, Driscoll’s transport system will be available.

Deep and Enduring Family Relationships
The typical NICU stay is 36 to 46 days. However, some babies have remained in the NICU for a year or more. “Our team becomes an extended family and develops long-lasting relationships with the babies and their families,” said Trish Carr, Associate Chief Nursing Officer, who was a neonatal nurse in the Driscoll NICU for 20 years. She still goes to the NICU every chance she gets to visit with moms and dads.

“I get the most joy out of watching the NICU nurses interact with our patients’ families,” she said. “They have their own families at home, but while they’re here they put their hearts into helping their NICU families. Caring for these delicate babies can be a struggle day in and day out. Everyone in the NICU goes above and beyond to get our patients well enough to go home and grow up healthy.”

Added NICU Director Chris Joyal, “Our NICU is an outstanding unit, and I’m blessed to be part of it. What makes me shine is the staff. They’re doing all the hard work; I’m here to support them. They are the heroes.”

*Name has been changed.

In June 2017, the Robert J. Kleberg, Jr. and Helen C. Kleberg Foundation awarded $600,000 to Driscoll Children’s Hospital to support their hospital expansion, which includes redesign and expansion of the current NICU.