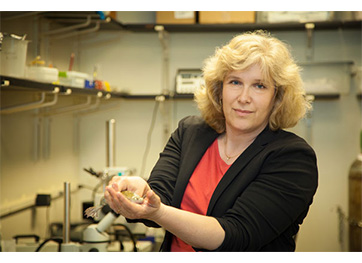 Amy Sater, professor and chair of the Department of Biology and Biochemistry at the University of Houston, was awarded a two-year, $386,000 grant from the Robert J. Kleberg Jr. and Helen C. Kleberg Foundation to develop a model for studying TBI. This is the first Kleberg Foundation grant awarded to UH.

“The goal of this project is to develop a system that will allow us to perform large-scale screens to search for possible drugs that can facilitate recovery from brain injury,” Sater said.

To develop this system, Sater will be using the tadpole of the African clawed frog, Xenopus laevis (Xenopus for short), which offers some crucial advantages for performing large-scale TBI studies. Small, with a rapid reproductive rate, they have a brain that can be easily visualized until the late tadpole phase.

Other model organisms – typically mouse and rat – have longer life cycles, brains encased in skulls and are expensive to maintain. By comparison, Xenopus offers an alternative that can allow wide-scale searches for potential therapies.

To interpret these results, Sater’s group will collaborate with the lab of Badri Roysam, professor and chair of the Department of Electrical and Computer Engineering. Roysam’s group will develop methods for quantitative analysis of images of cells responding to injury.

“We will be focusing on cells called astrocytes,” Sater said. “When there is a brain injury, the frontline response of the brain is mediated in large part by astrocytes.”

Astrocytes surround neurons and serve a variety of important roles within the brain. One role is the repair and scarring process of the brain and spinal cord. Following a traumatic injury, astrocytes migrate to the damaged site, forming a glial scar that limits the extent of the injury.

In addition to forming a glial scar, astrocytes also play a role in the post-TBI inflammatory response. In humans, post-TBI inflammation persists for months, even years, and is considered to be inhibitory to long-term healing.

Sater’s research group will create tadpoles expressing fluorescent proteins in astrocytes, allowing them to easily differentiate these cells from the surrounding tissue. This way, they can easily image the response of astrocytes to injury, giving them a way to assess rate of recovery. Sater’s group will also adapt protocols that are used to study brain injuries in mice for use in Xenopus.

Once these tools are in place, Sater’s group will have the capacity to treat large numbers of tadpoles with different compounds, while also assessing their efficacy in promoting brain injury recovery.

This grant will provide funds for two years and is eligible for the Texas Research Initiative Program, which matches research funds awarded through private gifts and endowments.